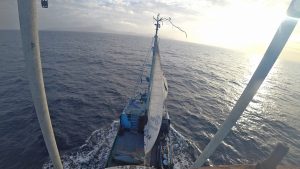 Since leaving Amsterdam more than three months ago, the Fools seem condemned to continuously waggling the waves. The fate of a flying Dutchman. Only the harbour master of Illa de Arousa stealthly conceded a mooring of four days on a panoramic mole to bring espectáculo to the inhabitants. And the harbour master of Valle Gran Rey gave us three hours to top the 14-ton watertank. That water is more precious than diesel or even wine because it accompies us to America. We doubt Cabo Verde can deliver such. Besides, in case the bunker gets sour, we filled an enormous amount of plastic bottles with mountain water from the beach fountain facing the ship. Rowing, rowing, rowing. These bottles are the usual, sad garbage of a town that became a tanatorium of old German hippies. It’s the wrong place run by the wrong politicians giving ludicrious arguments to decline permission for the spectacle. They pretend our collegue sailor/actors “Festina Lente” made too big a mess while presenting in spring their show on the quay…

Again, the five days of sailing look more like a Sunday afternoon cruise than a heroical braving of the Atlantic. Still, some nights, some sailors bind themselves with blankets to their matrasses not to be swept away. Many a glass doesn’t survive the moment of inadvertence of a novice steersmen. The garderobe, rapidly becoming redundant, swings with every wave as a mob of forgotten marionettes. A sea duck and even a bat land as stowaway. One morning we find a whole pan of flying fish scattered over the decks, even as high as the garden. Some made a direct hit to the kitchen already. They’re beautifully blue and delicately delicious and make the perfect Fish&Chip breakfast. A unique feature are the three sails hoisted permanently that gives a good mile an hour extra. After an interval of nearly ninety year, the ship sails again. With the archiviste Marja we select the best hundred-eleven pictures of the three decades of the itinerant theatre Azart. In memoriam of those hundreds of photo’s that never returned or never ever were made. Some art work sneaks in, some historical photo’s of the centenary ship and some pictures from the millenary imaginery of the Ship of Fools. Now, the reportage starts for real. Arrived at the Green Cape, we find an anchor place in between four shipwrecks and feel instantly at home. Without doubt, our ship is the oldest. Here we hunt for foolish actors. Music, or the voice, would be an excellent medium too, as they speak directly to the heart.