A Dutch Theater Ship on the Pacific Ocean

Just try to sail the world for over thirty years with a luxury yacht up to a hundred feet. Without money. With a love boat of ten cabins and an oak table that comfortably accommodates seventeen people. That requires a lot of imagination and improvisation. That starts with the transformation of a hundred-year-old North Sea herring catcher into a theater ship or, to be more precise, a Fool’s barge. This immediately puts many port authorities and the inhabitants of countless cities and villages in a cheerful mood. In the meantime you have the privilege of sailing with your own ship’s orchestra to where the nicest people of the surroundings come to the performances like bees to honey. To publicize the arrival of the Fools, you organize a ceremonial reception at the town hall in which to exchange an absurd speech and jester bells with a calligraphic welcome letter from the Lord Mayor. Meanwhile, the port authorities do not need to know that the so-called ship insurance is nothing else then an ordinary and cheap liability insurance that is drawn up in Dutch language, in which they just understand to their comfort the words “Theatre Ship Azart”. Moreover, it is beyond their heads to doubt what sixty port services have previously assumed to be sweet cake. Just as they have never doubted for years whether the skipper had a sailing license. Until, of course, you sail into the wrong ditch and cut an underwater power cable like once admiral Michiel de Ruyter cut the chains over the Thames. An entire island with hundreds of bellowing cows wanting to be milked was without power.

It’s a sheer miracle the ship is still sailing. Very rarely institutions or organizations has been tempted into some kind of subsidy or sponsorship. It hardly helps that the ship functions as an extraordinary Cultural Ambassador of Amsterdam. Instead, the vessel has been put on the chain three times. Three times is seaman’s law. The first time we bought piglets who managed to discourage potential buyers with their shit. The second time they begged us to please leave. The third time, after a lengthy process and demonstrations in the courtroom, we came to a ‘secret’ agreement because the electricity company did not want to set precedents for other defaulters. We still had to pay a big bite, but that was neatly delivered by the very illegal and very popular night cabaret into which the ship’s hold magically was transformed. She has also endured countless dangers, many of which we were never aware of or have already been forgotten. But we won’t easily forget the one that happened a few months ago. The idea was to spend some days around Christmas on an island twelve miles from Panama City. The skipper was sure he could get there without GPS and pointed the helmsman to the island. It turned out to be the wrong one. The island turned out to be very close. The mate appeared to suffer from the same syndrome as those who drive into a canal because the GPS says so. When the skipper returned from the engine room to the bridge, he narrowly avoided a dramatic collision. In fact, the feature of hitting a tiny island in the huge ocean would have been the most poetic apotheosis of the Ship of Fools that for thousand years has been the most absurd cart in the carnival parade.

The secret weapon is the 1959 “Industrie” engine. They’re so robust that the factory went bankrupt soon after delivery. Those Japanese and Korean junk engines that became fashionable have all long since been ground to scrap. This engine never fails. In fact, this engine enabled the skipper, who is a linguist, to sail the seas without a mechanic, all the way entertaining a reasonable chance of survival. You won’t nab the Fools on electronics, neither down in the motor room, nor up in the wheelhouse. The generators are still cranked with an old fashion belt. The engine starts with air pression. Well, there’s a VHF radio in the wheelhouse, but the GPS and AIS are broken. And we made the last four-day crossing from Panama City with a mobile nautical program, that is quite a shock if you are used to nothing but paper sea charts. Anyhow, we crossed the Atlantic with a Sea Chart of Magnetic Variation from 1975 that shows at 16 cm the accuracy of 1800 nautical miles. Fortunately, in Suriname you find the old-fashioned maps, especially useful on the Cottica river where you can sail for a hundred miles through pure jungle.

Unfortunately, the world is not a paradise. I remember how a so-called ‘cheese war’ broke out on board. That was on a Greek island We had so little money that the whole crew attacked like hungry wolves the piece of cheese we finally purchased. That winter, we survived t by regularly organizing a theatrical supper at the dining table, especially for the English expats living there. They had to pay the bill half in advance for us to be able to buy the food and especially the wine because they drank like Templars. In Palermo, on the other hand, the Mayor waved us goodbye with a traditional fifteen person orchestra and, more importantly, millions of lire, as much as twelve thousand guilders, only to proclaim Folly as Ambassador of the city. Those southern Italians are the real comedians. The harbor commander of Naples had his desk at the end of a very long corridor and to present him my ship papers, I had to walk all the way through. To the beat of my clogs and the jingle of my bells, there appeared left and right in the doorway more and more spotless white uniforms who started an applause that rose to a crescendo by the time I reached the commander’s office. Of course he wanted a photo of me and of course he got one on condition I would pontifically sit behind his own desk. At that time, the ship register was a green booklet with a fold-out sheet drawn up in Dutch: “Everybody Who Sees Or Hears Reading These Writings, Salute”. That’s pure theatre because you don’t expect somebody able to understand it. Those Italian ports are managed by the navy, so the conscripts catch the ropes in white gloves, thereby asking hopefully but in vain if there’s any hashish left. Sometimes there is a foaming harbor master standing on the quay side who, with all his rage and strength, prevents the ropes being thrown around the bollards. In Morocco, we had great difficulty discouraging some enterprising types from bringing a few hundred kilos on board. And then to discourage the uniformed custom servants from sailing with us to Europe right away. No problem at all, they added. Each of the 200 places between Casablanca, Sankt Petersburg, Reykjavik and Haifa where we presented the show, brought its own surprise.

For almost a month now, we’ve been moored on anchor right in the middle of the small fishing harbor in Esmeraldas in Ecuador. We just entered without the permission that surely won’t be granted in advance. But the whole concept of scraping together our income playing theater with the tribune on the quay seems PANPAN dead. There’s any money. There’s hardly an accessible quay to perform. And if we were to find a quay at all, the ship and show will disappear at low tide under the public’s field of view. Still, it looks like we’re going to present one of the most spectacular shows ever. On April the first we present a show about travels and dreams with local artists and musicians. It will be a kind of harbour day. The artisanal fishermen in this tiny harbour have sloops of six or seven meters with which they go to sea for a few days. They are big enough to take their wife and children aboard, plus a number of neighbors who would otherwise never come to the harbor. We hope that eighty or a hundred boats will moor around the ship. The press conference becomes a kind of protest for the local poor, independent artists directed to the city authorities, something like “Look, the Fools have to come all the way from Holland to offer us a stage, why can’t you provide that to them, not even a rehearsal room”?

The trip to Australia may be just about the last. We are all getting older and the very old lady Azart is also due for a serious and priceless makeover. The most attractive idea is to put her at high tide, at full power and with a strong breeze in the ass, on an exotic shore in the Pacific Ocean to open a beach tent. But first the ship crosses the Australian desert. We have been invited by the Uluru tribal elders to serve as a stage at the foot of the mountain for a healing ceremony. In Australia they celebrate the 250 years that Captain Cook ‘discovered’ the country. We know better. Those few years were enough to destroy an entire continent and the culture that managed the continent for fifty thousand years in a sustainable way. The ship crosses the desert on wheels as the happiest cart in the carnival parade to draw attention to the problems of the original inhabitants that have not been addressed in those 250 years. 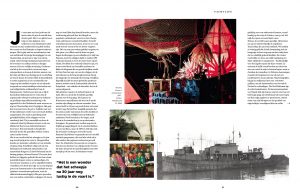