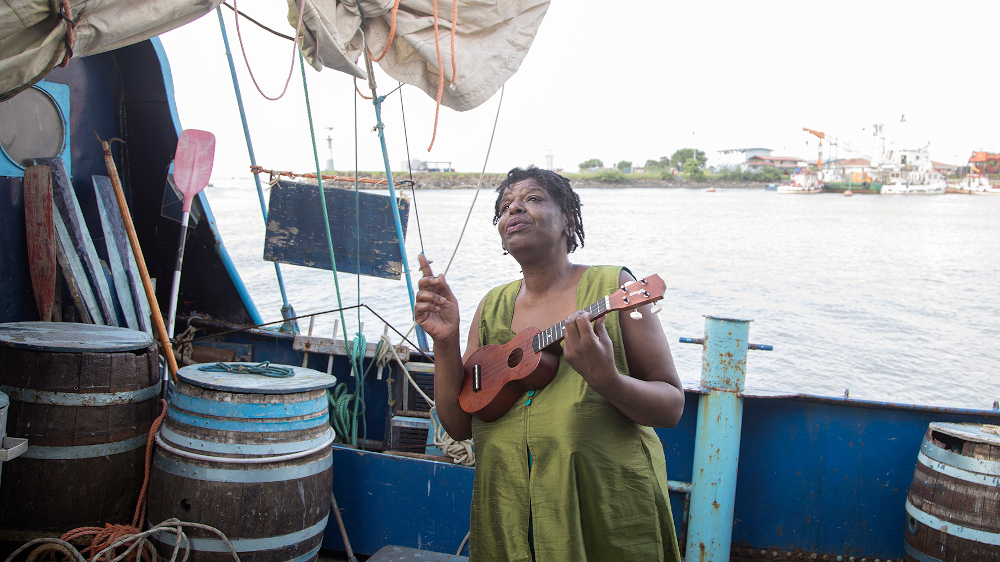 On board, we do not suffer from the loneliness many might experience on the third floor in the big cities. We are engaged in an absurd play with five completely different characters. The writer of these lines is your skipper. I would have called him “The Strolling Skeleton” if he didn’t write in the first person. Marja, with a healthy attitude to life and not afraid of the devil, we call “Tia Maria”. Then we have our boatswain “Shrink”, who takes the measure of souls with broad Russian gestures. There’s the Surinam maroon Tolin, our “Jester”, the theatre director who’s prevented to return home but who cannot stop making jokes. He consistently – and rightly – calls our ship “The Rust Bin”. Then we have another Russian, somewhat lost, whom we call the “The Phantom”. When he finally talks, he says that the Australian wildfires are an American ploy to destroy the Australian cows that breed the embryos of countless little Chinese. This is very serious because his Russian internet preacher spreads such truths and facts. Voilà your fellow travelers … It is not exactly the company that I promised in my chapter “School For Fools”, but certainly, it is a school for fools. 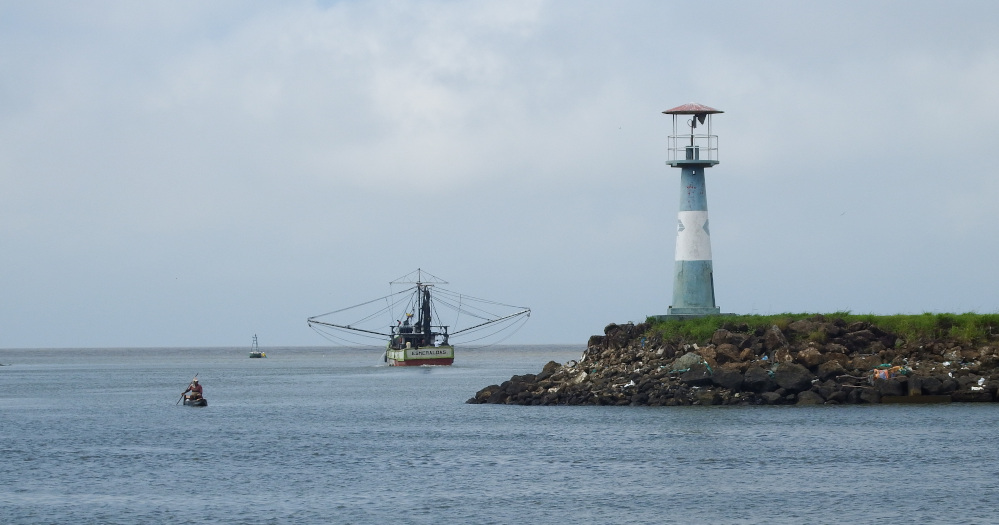 Personally, this crisis comes just too early because a month later we would be on our way to the paradisaical Marquesas islands from where further departure would no longer matter. Then we would have arrived flabbergasted on these islands while in the meantime the crisis would have shaken the world. You would automatically arrive healthy, after five weeks of voluntary quarantine. But it is not bad here in Esmeraldas. If wished, the fishermen bring fresh fish or huge shrimps in the morning, which, just like fruits and vegetables, remain dirt cheap because they are abundant. Occasionally you take a refreshing dip in the water which, admittedly, is not sky blue due to the river. However, in this town there’s a street ban, from which only shopping is exempted. They hardly care about that, still. “Big Belly” Ramón, who is on guard on the neighbouring fishing boat, came rowing over for a liqueur and says that the first case was already spotted in a village fifty kilometers away. The plague creeps closer .. 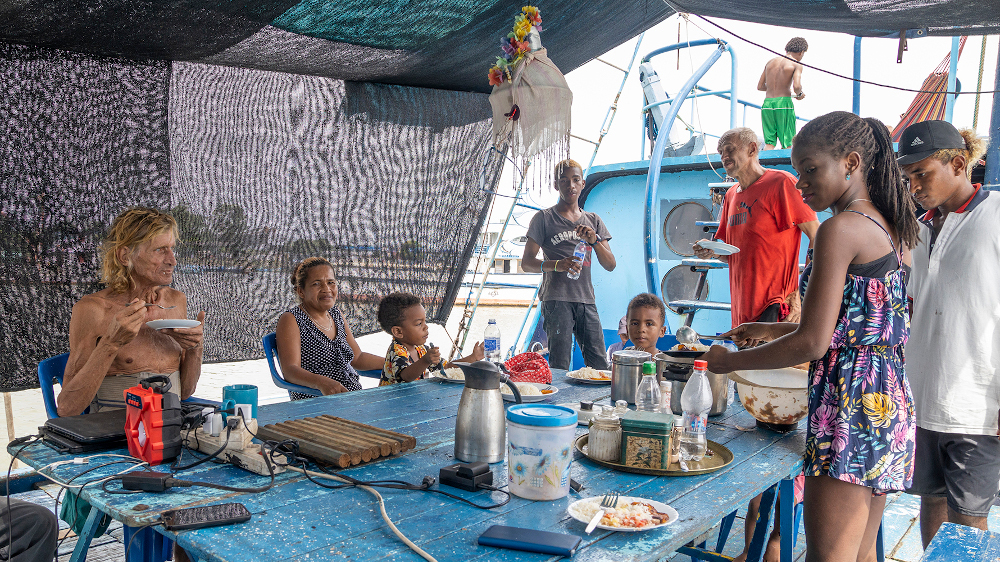 Rolphino, renamed Dolfino or “The Dolphin” came to visit as well. He regularly leaves with his son and a friend for one or two nights at sea to catch tuna. He comes along with his wife and nine (grand)children to make a tuna salad. We just had breakfast. The ship becomes a kid’s playground. He didn’t know what to do with his family because for two days he wasn’t out on the sea because the fish market is closed. Still, he may have to, if only to exchange food with his neighbours. At least he is a food producer and that also gives us a certain perspective on barter. They all just shake hands to greet you and if you hesitate he says “Ah, if you have to die, you’ll die.” That is a wisdom that comes straight from the jungle. The question is how the community will react when real panic breaks lose. When the whites descended on the continent for the first time, they annihilated the continent with their viruses. In any case, they have been living for generations at the basic level that could become quite a problem for Europeans. They are now also obliged to be quarantined for two weeks at home, but that is quite delirious as long as there’s nothing to eat. Hammerhead shark is on the menu for lunch. One of their friends just returned from the sea. When they are big they are among the most dangerous out there. Fortunately, they cannot cope with the brackish water in the harbour. We don’t have the illusion that the fish-party will continue forever. But the kindergarten is in full swing. We send the son of Delfino home with the assignment to memorize four lines by a local poet from his song of praise on Tapao. That’s a banana dish they will prepare for us next time. We’re going to film that when the whole family sits with us around the table. If that’s still feasible and wise to do. 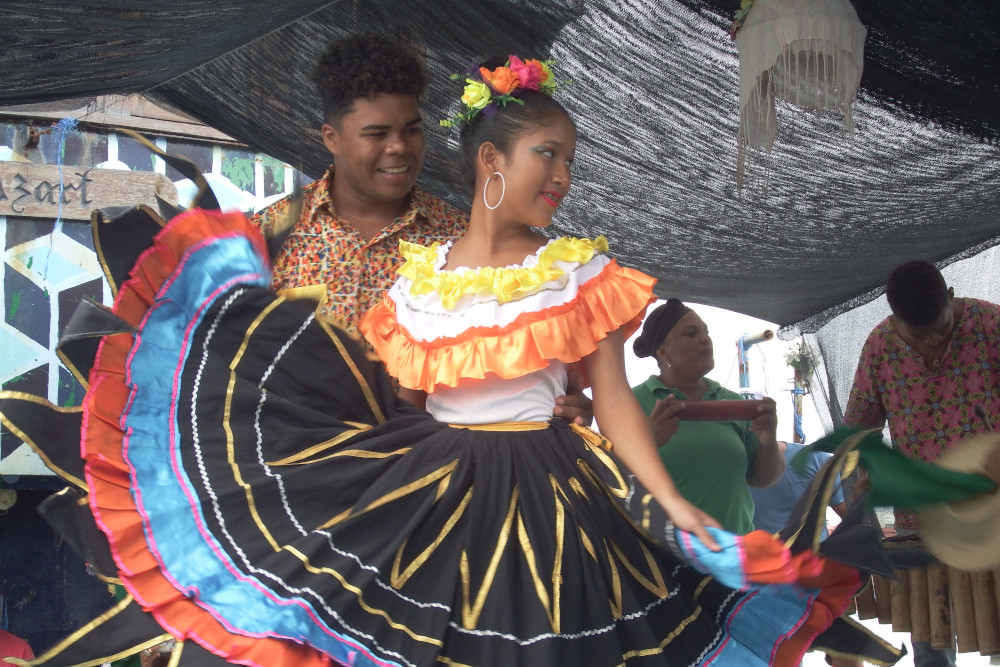 It’s also a shame for the show that was just starting to take shape. The title is “With The Eyes To The Sea”. That is very appropriate because the Pacific is a stone’s throw away and keeps beckoning. We made contact with “The Black Earth” (Tierra Negra), one of the best local marimba groups. This is a kind of xylophone made of pieces of bamboo of different length that is the pride of the local Negro population because it was recently declared an Intangible Cultural Heritage of Humanity by Unesco. In addition to our Jester from Paramaribo, a most cheerful, fat, black lady singer came from the Netherlands who was able to return home just in time. We had just mobilized the Cultural Service of the Municipality and the Tourist Office that would engage the Fisheries Cooperative. We are, completely unique, anchored right in the middle of the small fishing port and the intention was that the fishermen would moor around the ship with their boats for the performance. Each ship can accommodate a dozen of women, children and neighbours, which forms an audience that normally hardly ever comes into the harbour and which far exceeds the capacity of the tribune. It would be a kind of a April Fool’s Day in the harbor as a farewell performance before sailing off to new challenges. 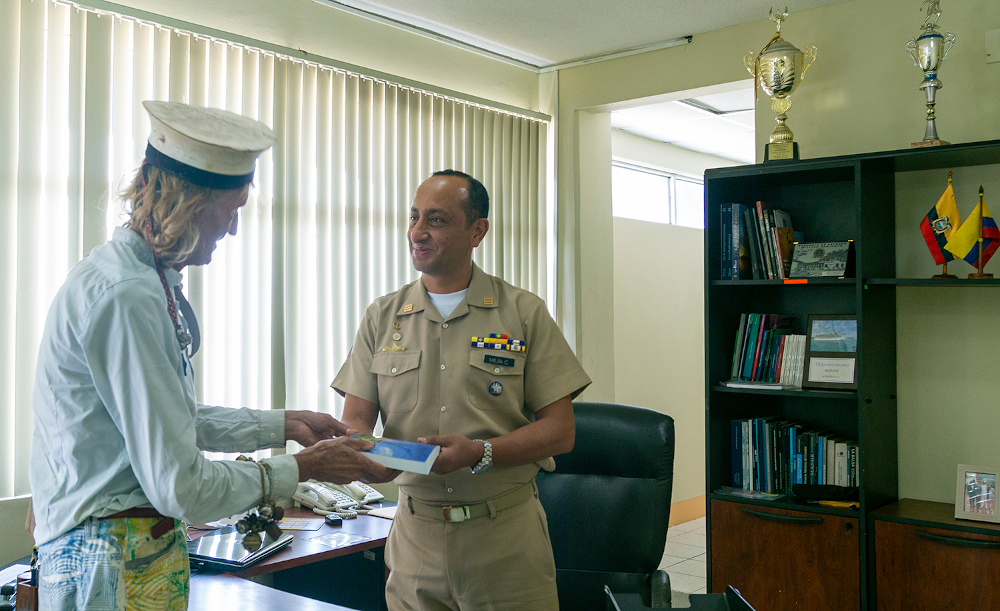 We made friendship with “The Comandante”, aka the harbour master. That is a high military function and to speak to him you have to antechamber for an hour. The first time he was in bright-white parade uniform. I was summoned to his desk with the somewhat impatient question of why I did not leave port because I had entered as an emergency case and must therefore get out as soon as possible. I said that although we entered illegally because unannounced, it was not an emergency and that we’re now completely legal and perfectly able to set sail. It turned out that his subordinates confounded us with a German ship on which El Comandante, aka “The Nose”, made his exhaustive apologies. “When do you think to leave?” , he informed, at which I replied, “Well, Mid April, just about after the performances …”. But reality has overtaken us so next time I can tell him that to leave my crew first has to cross the closed borders. 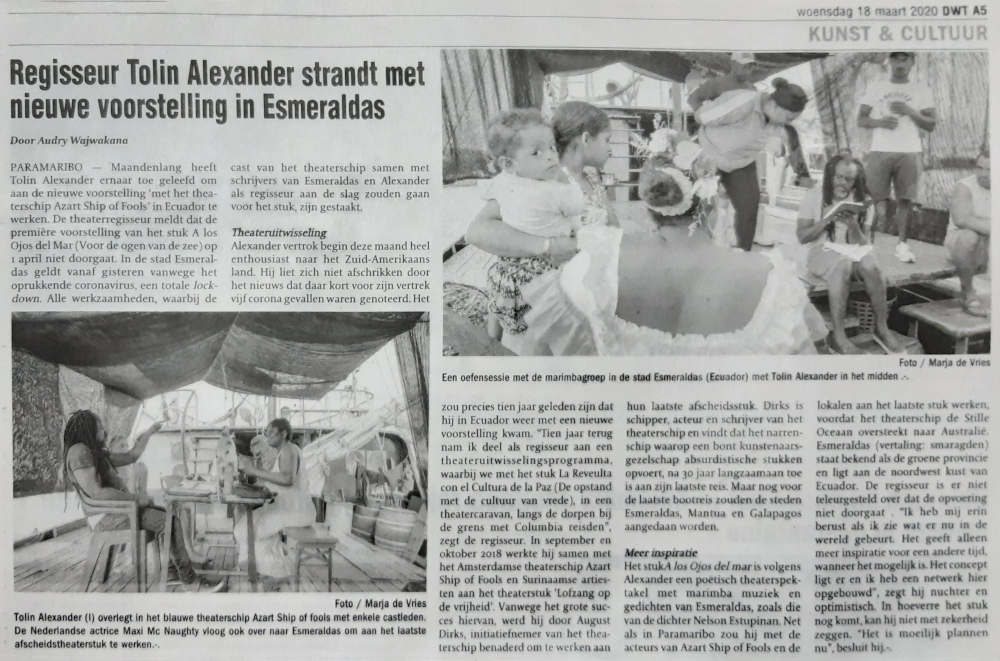 And a day later I visited him again to bring him the promised book “Azart – Ship of Fools”. We spent about half an hour chatting because he’s very curious and interested in old ships. He looked bewildered at me when I told him that as a linguist, completely unfamiliar with navigation, I whimsically decided to cruise the world with an mini ocean liner. His niece is the most important former ballerina in the country and his wife a fond theater-goer. They are the first Ecuadorians I met that really deserve the book because they read English. He promised to visit us on board with his wife. But the show has been canceled and social contacts are discouraged from above. Fortunately, our Comandante appears to be a creative personality, which could be of importance if bureaucratic problems arise. The book seems to be almost more efficient than a passport.

This is an illustrated book that is not too easy to read, so few have persisted to the very last line. It’s a pity because this last line has a disturbing undertone:

I had no idea it was going that fast. To leave no room for doubt, on the last page of the book is a picture of the statue of Erasmus that fell from its pedestal as an emblem of collapsing European humanist values. That may be one of the consequences of the virus. Anyway, it will never be the way it was and our Swedish Greta, as an emblem of contemporaneous youth, might be happy with it. 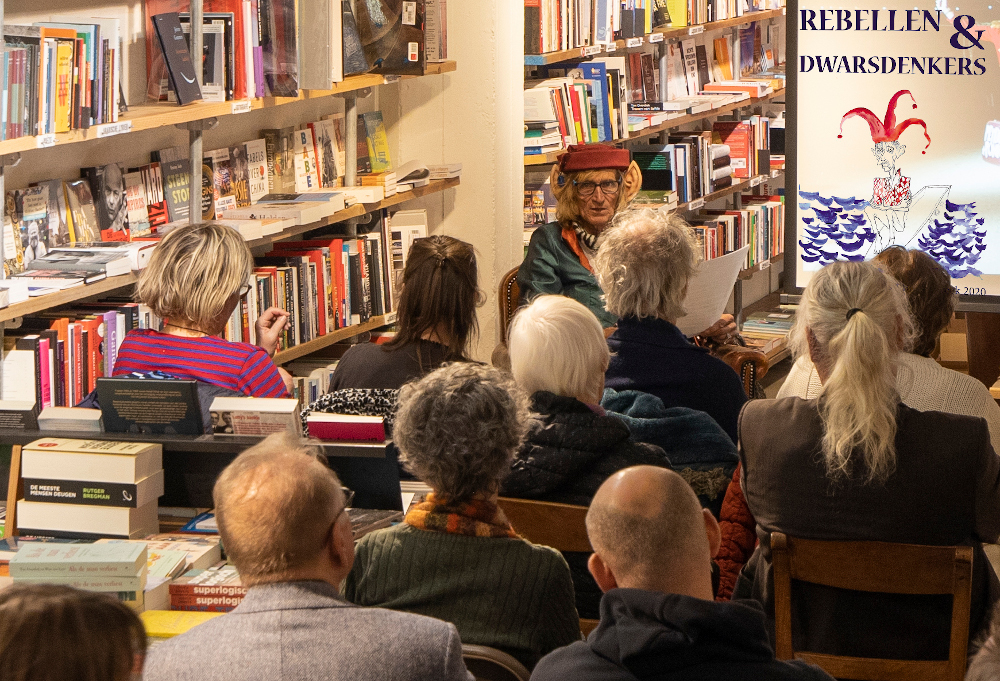 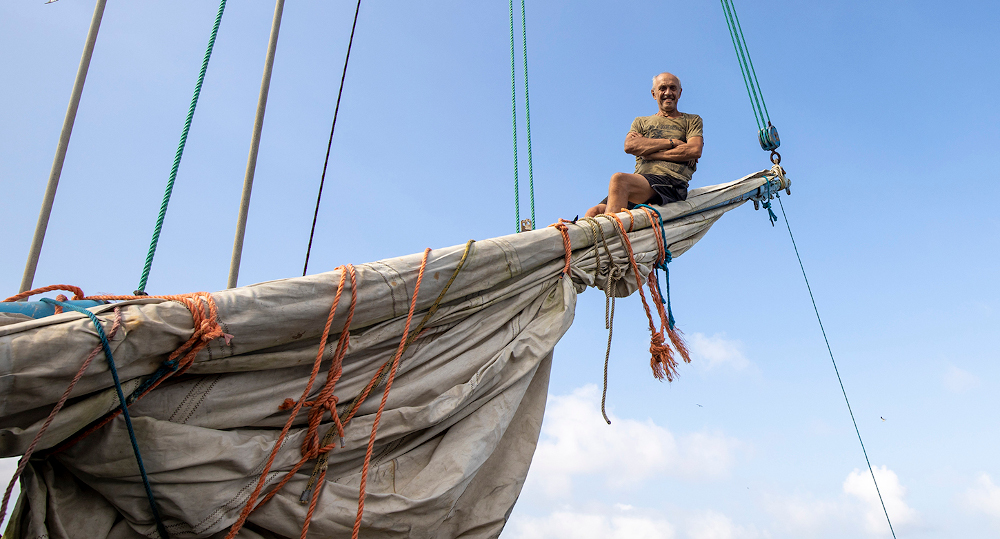 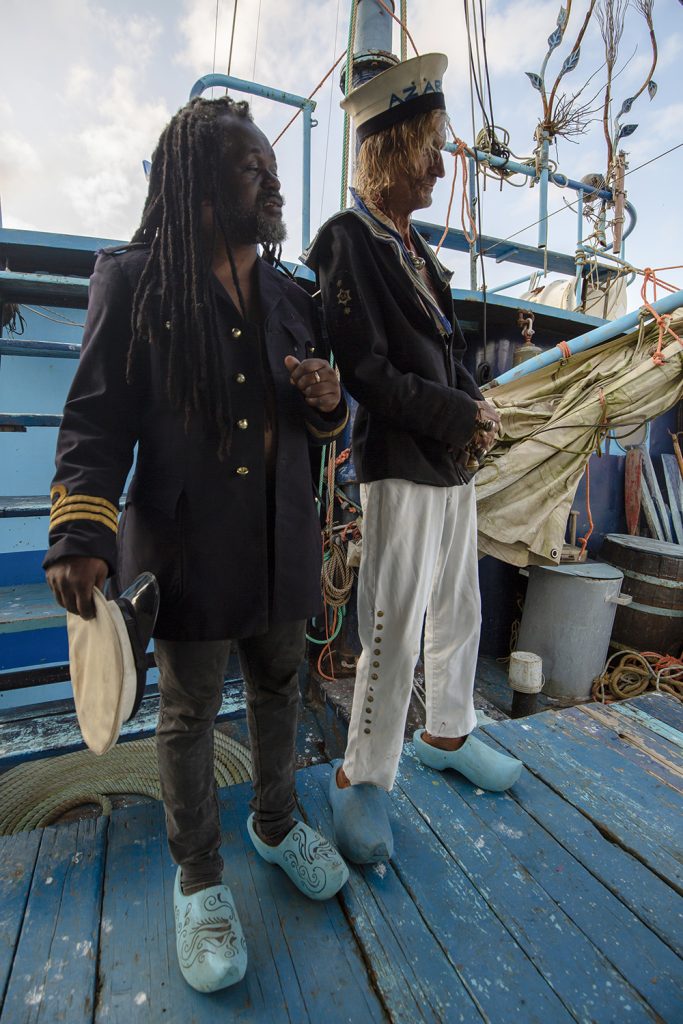 One thought on “WE’RE ALL IN THE SAME SHIP”