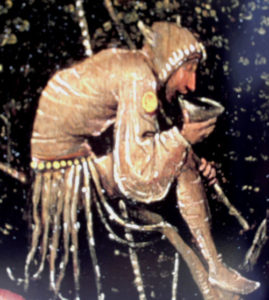 Ship of Fools, Hieronymus Bosch, detail
Azart is a non profit organisation founded to purchase, equip and maintain a seaworthy vessel
for the transport of animals, humans, objects, ideas et aliae to give artists and anyone
a chance to perform their transsubstantional activities
and so to promote a global cultural interchange.
(Statutes Azart Foundation 1986)

VALUES
The power of a collective artistic creation.
Folly as one of life's vital elements. 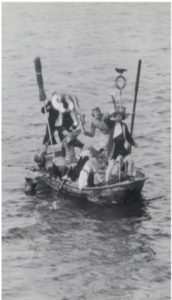 VISION
An everlasting festive pageant around the world in praise of folly. 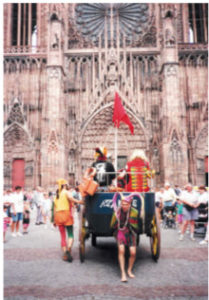 INTRO
TO ALL WHOM THESE WRITINGS  MAY COME, WE SEND GREETINGS!

The first line of the Azart Ship Register, 1995
Letter of the Queen
More

The Fools are in town! Their ramshackle ship a ridiculous and blatant toy upon the waves!
These motley sailors are a boisterous crew that inhabits the public place – to merchandise the living flesh of the spectator! It is the eternal Bateau Ivre that comes to your market places and squares. My God!
These fair folk brew in their floating pots and pans a concoction of greasy soup and black pudding, of absurd dance, roguish song and burlesque theatre. They drink, kiss and fight for the last piece of sausage. They celebrate life and the joy of living. Their show is homage to the culture of Mirth and Laughter, their spectacle the High Mass dedicated to Joyfulness - and a mordant satire of the scurrilous lies of society.

THE CREW
Stultorum Numerus Infinitum Est (Ecc 01:15)
The Amount of Fools is Endless The crew consists of the fraternity of the "Guild of the Blue Barge" **,
an ever changing group of independent artists from many countries
who embarked on a World Journey that is at the same time Life’s Journey - without end.
Their travel is a Festive Pageant around the Globe, a solemn pilgrimage – in praise of Folly!
Being a world-sailing Jester, the crew meets with Mayors, Ministers, Chiefs and other High Dignitaries but also invites meetings with the disabled, the unemployed, the mentally handicapped, the prisoners and the dispossessed of all continents, as fellow travellers upon this Universal Ship of Fools.

For the last 28 years the Ship of Fools has been a travelling comic theatre that has performed in over 200 cities in 20 countries. She is a sailing laboratory, researching a permanent participation with  local  artists and provoking an artistic, social and political collaboration within local communities.
Crew 2017
** "The Guild of the Blue Barge"
A satirical poem by Jacob van Oestvoorne, beginning of 15-th century. Azart is a traveling platform for artists of many disciplines to create poetic and innovative projects.
She invites artists from around the world for an artistic interchange with local colleagues.
This offers a unique environment as a laboratory and stage,
implying the local population of the city where resides the ship. 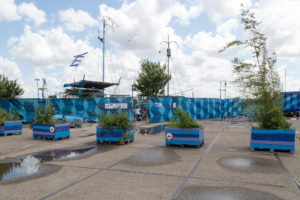 In every harbour the crew builds ashore a 300m2 "festive fortress" called "The Blue Square"
that includes the ship as stage and backdrop and a seating platform for up to 250 persons.
More

AN ITINERANT FESTIVAL OF FOOLS This "Blue Square" serves for some weeks or months
as a local theatre and temporary meeting place, as a county fair for the Arts and Theatre.
It's a small scale Art Festival for a public of all cultures and ages
for a artistic interchange of local and international artist.

THE THEATRE OF THE STOMACH . 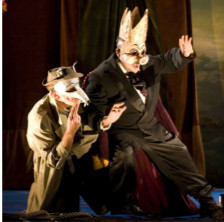 The Fools present a Universal Theatre accessible to a public of all cultures and ages, written in the universal language of comedy, in a tradition that links the the Roman satires and Saturnalia with the pagan fertility rites, with the medieval buffoon, the Commedia dell´Arte, the clown and the Theatre of the Absurd.

It's a Grotesque Theatre of disguises, distortions and mutilations, of transgression and transformation, of incongruity and disproportionality.

It's a Total Theatre, an interdisciplinary theatre of images, objects, gestures, marionettes, dance and music.

It's an Optimistic Theatre that exalts the laughter as the best elixir of renewal, the open and honest laughter of a child, jovial and liberating… the salutary laughter of a joyful metamorphose and malicious and insolent against stagnation and one-self.

It's a Direct Theatre, primitive, participative en anti-academical, with torrents of gaiety, efficient caricatures, clever and cynic inventions in which there’s continuity between the public and the scenic reality and where the public participates in de operation of catharsis – in a temporary suspension of banns and inhibitions.

It's a Gesamtkunstwerk (Total Artwork), a theatralisation of life that doesn’t limit itself to a set of performances but that includes the ship as an absurd sculpture, as well as the whole array of the travel and experiences of the crew and the images and stories produced by them. The entrance-tickets often consist of victuals, drinks, gifts or drawings o the ship.
Otherwise, the spectator is weighed and charged per kilo of body weight in local currency to enter.
This is inspired by mediaeval allegories of the age-old fight between the rich and the poor.
Overweight above 77 kg is gratis, entrance is free above 111 kg.
The show generally starts at sunset.

The tour begins in August 2017 in Amsterdam and follows the ancient trade routes to the East.
The journey leads by Brazil, South Africa, the Indian Ocean and India, Indonesia and Australia.
A dozen cities on five continents are going to be selected for a festival of about two months.
More 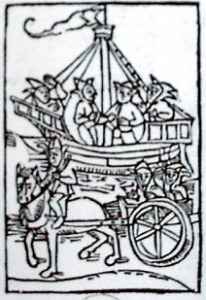 In 2020, the ship arrives in Australia and crosses the continent on wheels
as a giant monument dedicated to foolishness.
This voyage across the desert will be the jubilant apotheoses of the millenary history of the Ship of Fools that in history always has been a ship on wheels.
Animation The Bontekoe logbook was a seaman's story full of wonders and dangers that managed to catch the imagination of a young seafaring nation.
It became the most widely read and popular book of that century in which Holland became a great seafaring nation.
Now the country is about to relive a contemporary maritime dream. A ship is being rigged for another trip to the East, to tell a new maritime saga.This is an exciting sequel story of a group of actors, writers and filmmakers from all over the world whose travel and adventures are the subject of a collective artistic creation. Central to this is the collaboration with local artists. 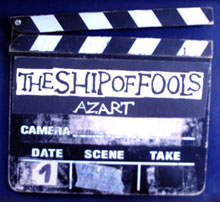 The Fool’s Log Book is a contemporary seaman’s saga on a centenary vessel
about the encounters with peoples, nations and the elements.
More A Centenary, Ocean-going Vessel of 160 Tons of Iron
More The figure-head wit it's spoon and fork signifies: "Here We Come, We Are Hungry".
Their stay in any city is an ongoing invitation for joint projects and a search for teachers, apprentices
and friends to engage the whole community in a tidal wave of collective laughter. The carnival traditions, a vision that expresses the essence European thinking.
More Azart reflects the City of Amsterdam as a cosmopolitan center of meetings,
a unique blend of ancient and modern, a creative fusion of culture and water.
Lord Mayor of Amsterdam
More Street sign on the Amsterdam Azart Square, named after the ship
A unique 'Lieu de Mémoire' of which the story is being written daily.
More 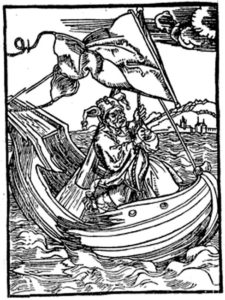 Of Contempt of Misfortune
“Shyp of Folys”, 1494
Chapter 109 Woodcut by Albrecht Dürer

The medieval culture of mockery and laughter is a unique phenomenon that provoked a ‘carnivalisation’ of western conscience and world vision. Her essence is, according to the famous analyse of Michail Bachtin*, the utopian, popular rejoicings of games and laughter, the universal, collective and ambivalent celebration of life and ever rejuvenating time. Its artistic principle is the dethronement of the sacrosanct and the crowning of the forbidden, the motif is the Big Open Mouth, the Gates of Hell that devour everything to give birth again. The fool disposes the licentious wisdom of the feast.

These millennia-old carnivalesque traditions engendered modern literature and played an important role in the reversal of the ‘Holy Order’ of Gods and Kings. It belongs to the essence of the cultural heritage of Europe and of the subsequent cultural patrimony that Europe gave to the world. Among the most exuberant, boisterous and subversive manifestations of this comic universe are the ribald farces, ludicrous processions, donkey feasts, mock-sermons, child Masses, death dances, erotic grammars or jolly funerals that inspired, as an exhortation or admonition, the greatest artists of that time, such as Hieronymus Bosch, Albrecht Dürer, Sebastian Brand and Pieter Breughel and continues to inspire the public imagination and many a modern artist to this day.
* Mikhail Bakhtin, Rabelais and His World, 1965 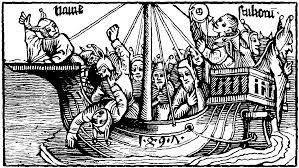 The Ship of Fools is the exquisite emblem of that comic universe of flamboyant popular laughter, it is the wheeled vehicle of the carnivalesque celebration of the powers of abundance. The Ship of Fools is a timeless image of the world turned upside down, in a spectacular play of identities: the King is a fool, the Fool a king, the poor are rich and the man - a woman! The Fool holds a mocking mirror in face of society, reflecting – and undermining the established order. The Ship of Fools is a symbol of mankind adrift, of the society that has lost its bearings.
More

Azart assumes proudly The Bleu Barge as her beggar's nickname

"Die Blau Schuyte" (The Blue Barge). Pieter van der Heyde, 1559. Hieronymus Bosch inventor. Rijksmuseum, Amsterdam.
Because the jester FlatPants is both a musician and a helmsman      The birds see him as a fool
And even though his company sings lustily      They will be called the singers of the blue barge

Jheronimus Bosch has left us five compositions of the Ship of Fools. Now the ship is being transformed into the aesthetics of his magic universe, into a bizarre, blue resonance chamber, a floating monument of excess and symbol of the Hyperbole. The main mast is disguised as a tree, the mizzen mast as a bell tower of disproportionate kitchen utensils. As a tribute to his (lost) work "The Blue Barge", the whole, ship, all the rigging, all ship furniture and all costumes and mobiles are being painted in a mosaic of one hundred and eleven different blue tones.
His compositions