It’s a miracle that the centenary ship Azart ends on a South American beach like a contemporary Temple of Folly. The miracle is that it still sails for more then thirty years despite countless dangers and financial hardships. The miracle is that the city of Manta has cleared a spot for the old barge on the beach of the hamlet of San Mateo. The miracle is that the energetic theater group “Humor y Vida” is embraces the project to create a cultural center. With the modern tribune and a professional beamer, it’s gonna be the village cinema and neighborhood theater. With ten cabins it will be the artist residence that attracts, like a magnet, artists from the entire South American continent.

The last hurdle is to drag the 180 ton ship over wooden beams 130 meters further up the beach. The fishing village of San Mateo supplies the small ships to pull the steel cables around the ship and to fix the beams under the keel. The province lends the necessary bulldozers. The Azart project has raised $30,000 to purchase the enormous cables and to pay for the labor, the divers, the pulleys & pork fat to grease the beams. Still missing is $18,000 for these twelve beams of tropical wood over which the ship is towed. The engineer wants these quality beams of 8 m. at 45×45 cm. because he fears others might split. The wood cannot be reused because it remains for the biggest part under the ship.

February 2021
The city of Manta in Ecuador embraces the ship on the beach of the fishing village San Mateo
The theater group “Humor & Vida” turns the ship into the cultural center “Buque Azart”
Azart continues to tell her stories
The Show Goes On ! 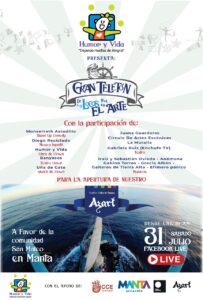 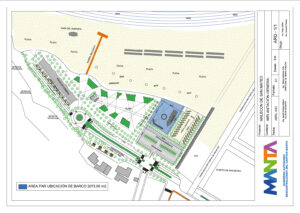 Planning of the city of Manta. The ocean is at the top.
The blue area of 2000㎡ is reserved for the ship and tribune.
After thirty years of free navigation, the ship will be neatly encapsulated between bus stop 8,
the parking lot for cars and small fishing boats, between the trees and bars. 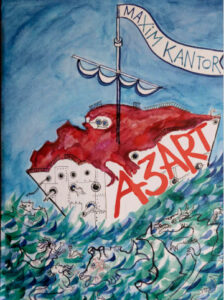 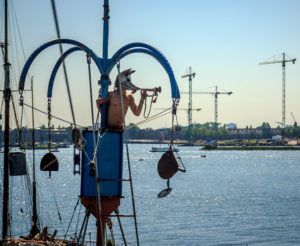 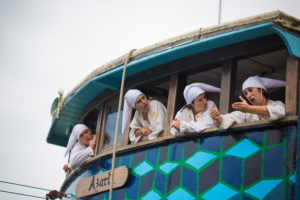