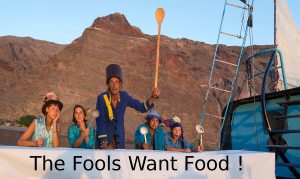 .
The Fools finally arrive at their eternal summer. The pilot boat of San Sebastián harbour, on the Canarian island Gomera, gracefully escorts the ship to a deserted beach with pristine waters. Playa de la Guancha. The Guanche are the original aboriginals of the island. A perfect spot to start rehearsals that rock against a stunning scenery. The daily experiences are the subject of the new comedy. A foolish captain engaging a foolish crew for a foolish world trip. The show is a choreographed waiting for the food that the public brings in as entrance tickets but that never comes. A drunken sailor, haphazardly, chucks the pan into the water. Central stage is the long blue table on deck on which we rehearse daily our sunset evening meal.

Slowly, rumours run around the island that the Fools have arrived. The first inhabitants approach ship with their pumpkins and bananas. A passing fisherman throws seven fat fish flying to deck. Some Yersey yachtsmen empty their fridges stuffed with calfsmeat, shrimps and merluza. Some of the crew sail the dinky daily into town for food and wine. When an occasional cruise monster moores, musicians from all over the island go busking. In those days, food abounds. The captain has only twice left ship for negocations with High Authories. That’s no easy bussiness. First, there’s hardly any place in these tiny harbours for a solid vessel like Azart. Then, they’re rather expensive. Then, local chiefs have no say over them. These ports are run by far-away organisations based in Madrid or Tenerife. But, most alarmingly, they require a burocracy that requires a lot of fantasy. Nothing is taken for granted: the arrival of fresh comedians, the permission for the shows, the reactions of the public, the moment to set sail six days southwards, nor tomorrow’s winds and waves.

Nor tomorrow’s waves and winds. One night, we find ourselves drifting towards Mauritania, the anchor swinging a jolly thirty meters down into the depths. That invites us to let loose triple chain. After twelve days, our paradisical Guancha beach suddenly and collectively starts boring us, so we swop places to some bays ahead. A tiny village called Playa Santiago. Next day already we swop places again, this time to protect the ship from the hot south-eastern, Saharian winds. We actually could make eternal magical tours around this island. On the western site of the island we find impressive cliffs and a meditation centre facing the anchor place. This town is called Valle Gran Rey, the Valley of the Big King, after the last of the Guanche kings. Here, the Fools have a – suspended – permission to present their new play. The Show Must Go On!