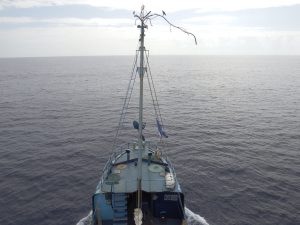 The world trip finally gets going. Departure again was postponed for about a week, for many a last minute ajustment, for meteorological reasons and for the petrol station running out of diesel, scandalously presuming Fools never would need or meet up for big quantities of diesel. For a whole weekend, while waiting at their station, the ship attracted large crowds of curious of all ages that familiarly and shamelessly settled themselves in front of the ship. And that cheerfully waved us good-bye when we escaped to a paradisiacal anchorage away in the bay. There, our ship writer and doodle-player joinly accomplished the miracle of an unexpected and delicate repair job by repatching the exploted cast iron exhaust manifold that alarmously went leaking again. The patch work of our dear master engineer lasted nine sailing days. The anchorage was in front of a ship yard of traditional wooden craft that invited us for an excursion to their wharf covered by journalists.

And now six days sailing to the Canaries. Never ever been so well prepared. A unicum to give sailing instructions before sailing. Without cups or plates lingering in the steer hut nor any unwanted object occupying illegal places, without the content of so many drawers spread out over the floors, the travel looks more like a sunday afternoon trip then a dramatic good-bye to Europe. No leaking holes, no broken gaffs, gibs nor jibs nor torn sails – only to find in all the cabins, huts, saloons and rooms a very unfoolish neat and trim. Even an unprecedentent tidyness behind the cupboard’s shutters. The motor produces a stupyfing mantra and would be most delighted to run for another eleven thousend seamiles straight to Australia, or, for that matter, aonther seven years non stop – gazoil provided. The sails are put up for action, for mere exercise, arching for winds. Lake Atlantic. They new main sail, a present freshly given, exposes a huge blue Polish pharmaceutical publicity. “Lek Dla Serca”. A Medicine For Your Heart. South of Lisbon the sun starts hitting and the fruits and veggies running out. The DJ set including a host of classic CD’s moved to occupy the steer hut but badly misses our Amsterdam crew member and star DJ who played there some unruly nights crossing the Gulf of Biskaya.

For the next steps the crew has the key. Already, it’s a great team providing fabulous facilities for guest artists. In the afternoon she meets on deck to devise a new show, promted by the spoon and fork of the ship’s figure head: “Here We Come – We’re Hungry”. It’s about a foolish captain stirring up a crew to great and good deeds. A comedy of slips and flops and fiasco’s around a desperate, central staged banquet. The food and drinks are provided by the public as a way of entrance ticket. All elements are on board, provided by a well stocked dressing room, a wide experience and age old fool’s traditions.

An tremendous Atlantic full moon accompagnies us when crossing from Europe to Africa. On the port side the moon rises at dusk while the sun sets at starboard. At dawn the main actors swap roles. As time is precious, we concentrate on beauty and things that matter. We give a wide berth to tourist traps as Tenerife or Las Palmas and head straight to the tiny island Gomera where goat herds communicate in an age old whistling language. The island is in sight. We leave a confused continent behind. We’re your circumnavigating embassador, praising the carnivalesque traditions that put your perspectives upside down and that saved you from fundimentalism. Fellini told so: E La Nave Va !

3 thoughts on “FAREWELL TO EUROPE”