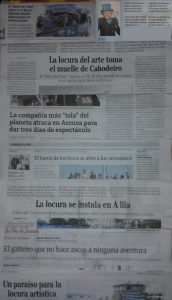 About a month ago the Fools arrived, exhausted, to this island and the locals required a relaunch of the fool’s spectacle as they remembered nineteen years earlier. Right they proved to be. A whole range of elements conspired to realize their claim in a superb way. First, a local clown called ‘Peter Punk’ saw the ship arriving and decided to mobilize his clown friends to collaborate with a festival. In the same way, a local gaita player, an old friend we met in the Basque country, decided to mobilize his crazy folk band to take part. Moreover, he and his Italian clarinista embarked for the next destination. A local fisherman borrowed his buoy to let the ship moor in the bay. The harbourmaster thought it wiser not to bother his superiors and magically gave his permission. Ramón the fisherman piloted the ship across the hidden and treacherous rocks. Ship and tribune were supremely located on the end of a jetty on the beach. The newspapers persistently published the proceedings, three days in row. They really did their best to invent incentive headlines. The Galician TV-News came along, eager to satisfy the curiousity of their audience. So last weekend, the first international Fool’s Festival took place. The programation was overwhelming, starting with a ‘Theatrical Visit‘ that brought kids and adults alike aboard – along six exciting cabins. Never before we’ve seen such a grateful public almost entirely connected with the fishing and the sea. First awaited them the ‘Pirate’s Cabin’ where the bandy-legged French sailor wisely stayed in bed receiving the public. The tour continued with a terrorific nymph in the ‘Princess Cabin’, followed by a foolish captain issuing foolish sailing licences in the ‘Steering Room’. Next a terrific granma scared the kids in our well stocked ‘Dresssing Room’. In the ‘Stowaway’s Cabin’ some pillows and the snorking from a mobil phone represented a sleeping, illegal refugee. The final stage was the ‘Artist Saloon’ with the ship orchestra playing local folk music while the cook prepared pinchos while explaining the ship’s history. All along the Amsterdam star singer Merante entertained the public from a fishing net hung up high in between the mast while holding a dutch clock from a ankling rod. ‘Pinchos’ is a favorite Spanish pastime that provides white wine with anchovies and other delicacies. So ‘Pinchos With The Fools‘ was the Festival’s Late Afternoon event that again seduced the locals, not so much with the poor quality pinchos but so much the more with the monologues, jokes and exhilarating melodies of the band. The highlight of the festival was “The Fool’s Gala”, the show itself, boldly reviewed in the newspaper as “A Risky Artistic Proposition That Mixes Comic Theatre and Circus”. Well, the local clowns Peter Punk, Coo and Pajarito performed first, perfectly knowing how to handle with their quirks their audiences. We Fools boldly restaged in three days our Amsterdam performance that surely dazzled our dear public by its unexpected windings. On Saturday a sensual Cape Verde woman percussion and singer band completed the festival, anticipating the Fool’s next destination. The last event was called, for not being published, “La Nada” (The Nothing), an illegal night club for the crew, the participating artists and their friends. Here, we introduced the most spectacular attraction to our night life that already in Amsterdam was famous for the ship wobbling and the floor wiggling. Here, with low tide, there’s only one meter of draft, so we put some more weigth to port side to have the ship leaning against the quay. But then, the merry-makers are dancing on starboard and one little dancing movement proved to be enough to topple the ship twenty degrees to starboard in one dramatic blow that tumbled a lot of glassware and nerves. The crew continues to be exhausted. In a few days she sets sail to the Canarian island Gomorrah, pretty confident to finally live up to our motto of ‘slowly hastening’. While writing this log book some nocturnal delphins encircle the ship.

The “Ship of Fools” Offers in La Illa a Delirious International Show with Local Artists
The Public Pays 13 ct A Kilo * The Artists Sail Since 28 Years From Harbor to Harbor *
Collaborating is the Islander Peter Punk
Faro de Vigo, Sept 21, 2017, frontpage.

The Folly of Art Takes Possession of the Cabodeira Quay
The “Ship of Fools” Returns to A Illa After 19 Years, On Her Way To Australia
Faro de Vigo, Sept 21, 2017

The Most “Foolish” Company of the Planet Moors in Arousa For Three Days of Spectacle
Diario de Arousa, Sept 21, 2017, frontpage

The Most “Foolish” Company of the Planet Moors in Arousa For Three Days of Spectacle
The Ship of Fools returns to Cabodeiro with invited artists like Peter Punk or “Coo”
Diario de Arousa, Sept 21, 2017

The Ship of Fools Opens Herself to the Arousians
Moored in A Illa, the ship offers during the weekend a most various program together with local artists.
La Voz de Galicia, 21 Sept 2017

Folly Settles in A Illa (The Island)
The Ship of Fools Surprises With Her Risky Artistic Proposition That Mixes Comic Theatre and Circus
Faro de Vigo, Sept 23, 2017

The Gaita-Player Who Says Yes to any Adventure
Simon Premieres in the Ship of Fools, a Kind of Floating United Nations, to Perform in A Illa and to Set Sail to Cape Verde
La Voz de Arousa, 23 Sept 2017