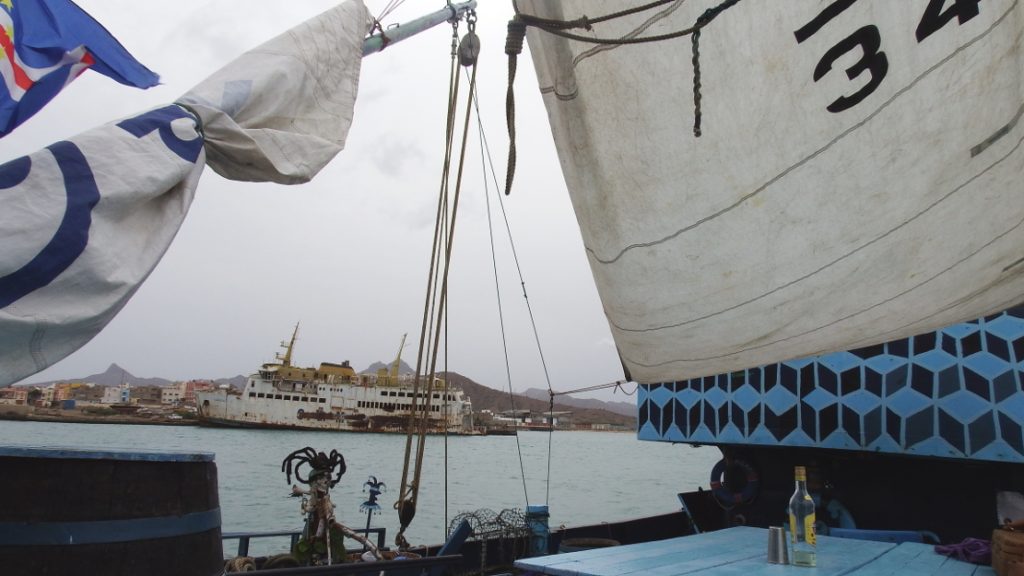 It feels like the ship sails a century backwards into history, chucking modernity rapidly overboard. Daylight lasts from seven to seven and telebanking, electricity, clockworks, news, agendas and garb quickly become a sideshow. Staple food on this island are potatoes, onions and fish. Tomatoes keep a pre-war taste but are at 3 € a kilo barely affordable. That reminds us of those dozen fishermen who slept a hundred years ago in the net room that now is our theater costume room. The fishing nets served as their mattress and in the middle a huge cooking pot served them potatoes, onions and fish. Like many of the locals, they were often kids working for a grab penny. But the cheerfulness of the Cape Verdian poor is without doubt inversely proportional with the protestant rigidity that characterized the old-time crew who dreamed about the eternal Jerusalem without having a clue about what really matters.

Besides sailing backwards, the ship sails southwards, towards other time zones in which the notion of the hours and dates fade away. It lures, to dismiss time. It’s quite a surprising novelty to find yourself waking up with the sun. As big a novelty as when you find yourself cleaning the guts of fish when you for thirty years persistently pretend NOT to fish dead fish but living souls instead. But what you do if poor fishermen throw fish flying on deck as a present? Anyhow, the strongest urge not to forsake modernity and electricity completely is the necessity to communicate with the world. Last millennium, a mere twenty years ago, I used to take a bar stool and a handful of coins to the nearest pay booth. It was the seasonal autumn work to try to reach a three dozen Italian, Spanish or French aldermen of culture about a summer show. You organised a tour by consequently phoning them with a wacky accent until getting to know their secretaries. Then you send them an old-fashioned letter deliberately with orthographic errors. The Fools Are Boarding Town. Now the situation is reversed. Now we rely on improvisation once arrived. But more then ever we need the connectivity to tell the story and share them with our fellow travelers all over the globe.

We anchor the ship in front of the fish market. With the dinghy we first land on the crowded mole where the fishermen bring their night catch. That mole now is our navel cord with the town. Straight behind the fish market is a former police prison transformed into an artist area. We speak there with a local theater group about sharing a theater festival around New Year and with a sculptor about restyling the Hieronymus Bosch tree in the foremast. Within a day we have the key of the prison and a rehearsal room. A story worth a documentary. Despite a luring Southern pace we cannot resist improvising a whole range of lofty assignments. The last one in this island will be to optimize the rigging and sails of the ship so as to ease the crossing of the ocean.