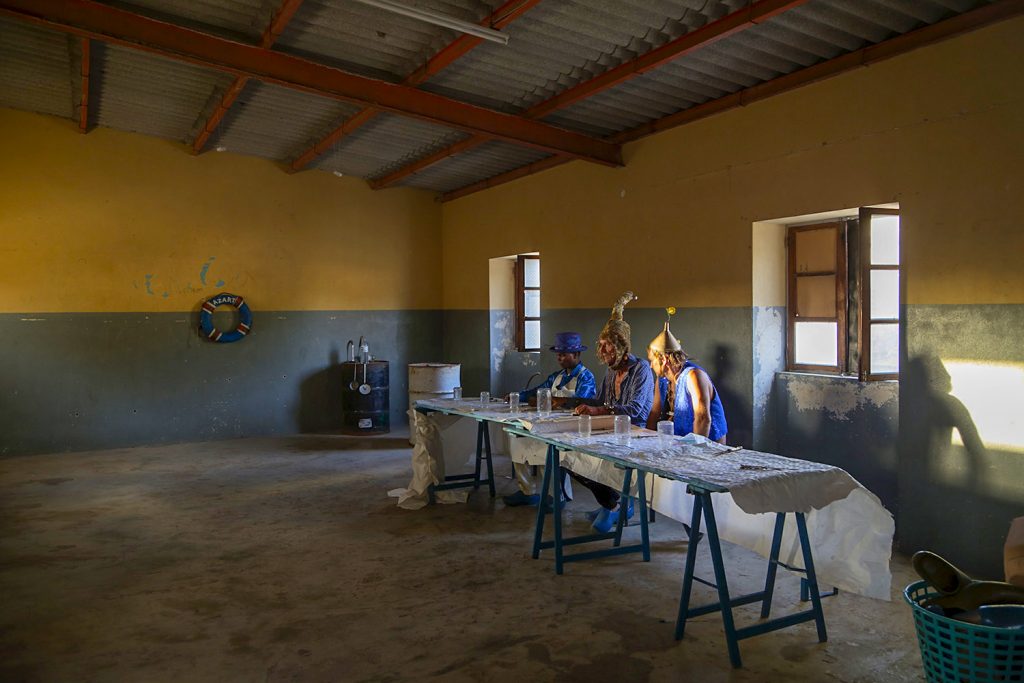 The small town of Mindelo is a country in itself, far away from anywhere. Abundant smiles accompany us everywhere. Pedestrians, women and street dogs are treated with full respect. Our land base is the “Backyard of the Artists”, the former police station where we found a co-director, five actors, a violinist, a lot of friends and the rehearsal room where before the jailbirds used to sing. In this backyard the sculptor Hermes dos Reis is constructing a new absurd tree to be put in top of the main mast. Our land based vehicle is parked there, the “Blue Carriage”, painted in the ship colors with which we’re gonna make a festive parade in town to announce another Festival of Fools. The Fools encounter a new country, the Capital of No Stress. You’re lost, if stressed.

Rehearsing is quite a challenge. The actors are working in day time, so rehearsing starts with sunset. Since there’s no electricity in the room, we work with pale lamps. An actor won’t show up because a rare rain forces him to help his mom to fix the roof or put the buckets. Another actress won’t show up because her whole neighborhood went out of electricity. Or sometimes, despite their laudable motivation, they don’t show up at all. Concentration only strikes by divine inspiration. One of the actresses is a seven year old girl who’s very talented at distracting. She and her mom will be seated on honorary chairs aloof from the stage. Most encouraging already are the abundant smiles of the friends of the friends who just walk into the rehearsal room.

And where the Fools present their festival? Will it be the “Cabotage Quay” or the “Ship Cemetery of the English”? The first place is very official, the first quay from down town, with guards and dependent of the permission of the harbor director in person himself. That meeting is scheduled two days before we’re supposed to use his port’s facilities. The second place is more of a dark place where decent families won’t venture at night time. With two imposing wrecks it is still in use as a cemetery of ships that are double in size but half of Azart’s age. We would squat this decrepit and messy quay side that has the attraction of carnival in hell and would be a paradise for our documentary filmmaker. It’s a stress reliever not to have to choose our-self between these exiting locations.

Over the years we’ve seen theater directors that came from Holland, Russia, South-Africa, Australia, France and Spain. For the first time, by default, the captain himself has to play the playwright and director. He’s quickly losing his embarrassment because in this outlandish place nobody is checking him out. It reminds of the first time he dared to speak in public. In outlandish Russian he distributed Brezhnev-masks to the rock stars in the Moscow Olympic Theater without anybody checking out. Now, fortunately, the director of the local theater group likes the play and helps out with ideas and with disciplining his actors.

3 thoughts on “NO STRESS”