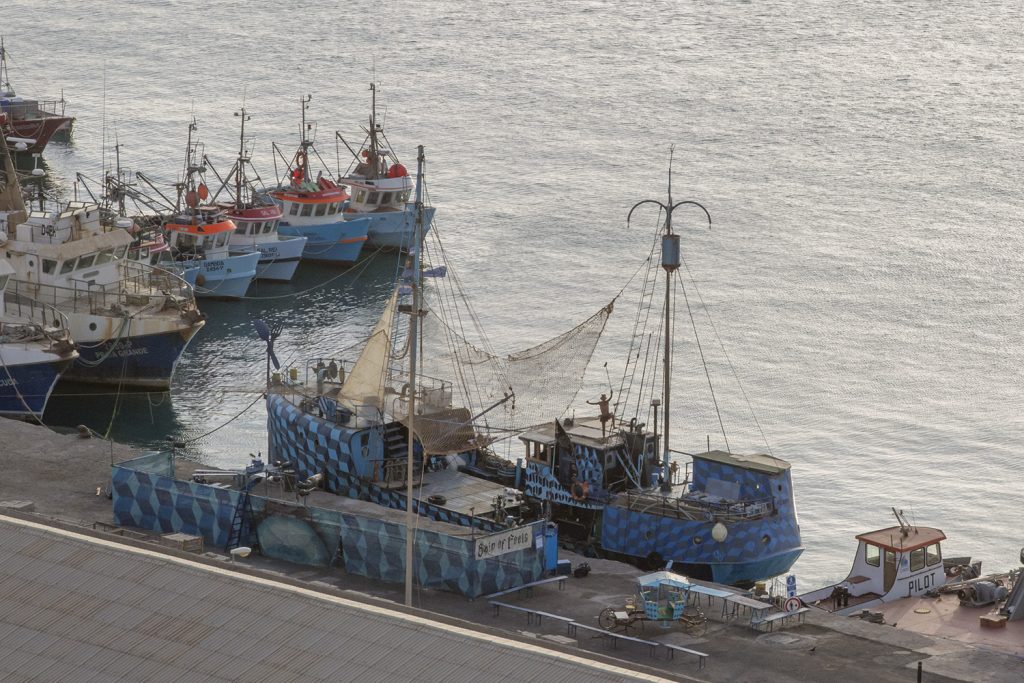 The Cabo Verde Festival of Fools is fun. At eight in the evening the World Premiere is about to begin. “Captain Fool” awaits his public at the main gate of the Grand Port. From far is visible that three persons are approaching. It’s pretty clear the whole concept of Azart is out of tune. Time to look for another job. Wrong! It’s nothing more then a Cabo Verde no-stress test. Half of the tribune fills up and laughs for two. The comedy works! That’s due to the wholeheartedness of the local public and especially their children who innately spend their days smiling. Part of the fun is the reality character of the show. As entrance ticket the public brings the food that first turns into the subject of the comedy and then into the evening dinner of the hungry crew. It’s mostly rice, pasta and oil. With daily about eighteen table companions it’s jolly high tide again at the fool’s table. Half of them are the local fellows that collaborate with the festival and the new sculpture in the mast. Two actors use ship and stage for a theater play located in a madhouse and turn it into pure beauty. At night time a new ship orchestra is being born: clarinet, German flute, guitar.

And the French pirate plays his innate dedication to Bacchus. One high point of the show is the hole in the ship produced by a water spray under the stage. Panicu! Panicu! With his starboard clock the captain bravely manages to close the gap, at distance control. After the premiere an authentic hole under the waterline materializes, enough to fill a bathtub in an hour. The brave crew close it with teflon and a screw. There exists no captain without a crew. They are the real fools. It took ten years of sailing before they addressed me as “Captain” and some other years to get used to it. Now the people here start using a “Commandante” that gets Che Guevarian dimensions. Il Capitano Loco is the nickname befitting best.

Wind, chance and caprice determine the Fool’s course. Shall we take part in the Mindelo Carnival that is the island’s party high time? Or maybe we find a quay on some other Cabo Verde island to present the comedy? Do we sail the thousand kilometer upstream of the Rio Grande de la Magdalena? Do we change course and set sail straight to the Pacific instead of South-Africa? Next year tells it all.