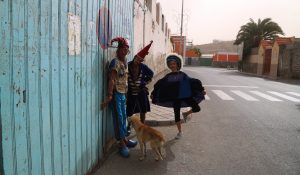 AMERICA !
The sea keeps on calling. Strong winds keep pushing westward. The sailors long for new horizons. Partir, c’est mourir un peu. Scandalously, we leave this generous folk who’s now massively preparing their most frenetic annual ceremony, the carnival. Already they celebrate, as a foretast, their lusciously dancing parades. One of the carnival companies is based in the Quintal das Artes, the former prison next to fish market. While welding they protect themselves by sunglasses. They weld the bracelets, wings, headgear, costums and instalations whose exhuberant designs are being kept secret. This free art space serves as our land base where the artist Hermes dos Reis created a new iron tree. Only with that particular mix of intrepidity, danger, chance and luck that ‘s hidden in the word azart, the crew manage to fix this tree on top of the mast, braving the swinging of the winds and waves. For this operation, the harbor is happy to give the quay for free, just in the same way as the ship stayed one week more after the festival. The company that constructed the complicated flanges that connect the mast with the tree refuses payment. The price of fame, albeit fugacious. The bounty of three free minutes on the national news. And the sound of “Capitáloco” that rebounds in the small streets..

There’s a new bizarre tree showing in top of the mast to dazzle the inhabitants of the jungle. Four disproportionate kitchen utensils are hanging in the rear mast, a giga corkscrew, a mega cooking pot, a giant funnel and a super soup spoon, each measuring a metre. Iron crows circulate around the crow’s nests. The Fools depicted by Hieronymus Bosch finally set sail on their eternal pilgrimage.

The first destination is some hours westwards, a little village on the island São Antão. We drop the anchor just opposite the local bar on the beach. The island is famous for it’s fruit, vegetables and grogue, the local brandy made of sugar cane. Here, we take these provisions, we shave the vegetation around the ship and prepare the five sails to cross the ocean. We sail to the carnival of Saint-Laurent-du-Maroni, on the border river with Surinam, that promises to be quite furious as well.

The Fools sail through paradise while you defy storms and gales. We’v become Africans: as long as there’s something we do not need anything. But on arrival in America the tank will be quite empty and you’ll enjoy spring. Support Now.