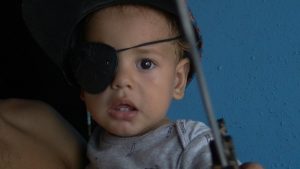 Moretti
For almost two months we negotiated with the city of Barranquilla to find a mooring for a cultural exchange with local artists and with the public. The city is famous for it’s carnival and for being situated at the mouth of Colombia’s biggest river La Grande Magdalena. But the city is completely cut off the river by islands and industries. So they build the “Gran Malecón” (The Big Waterfront) to give the river back to it’s inhabitants. The first and only visitor so far has been the Colombian navy’s Flag Ship “Gloria”, a three-masted barque that attracted thousands of visitors. We Fools would promote the place, as we have been for decades in countless harbors the first in giving an artistic dimension to traditional maritime functions. And the cultural authorities of the town loved the idea. So we finally got the permission to moor. Except, we hadn’t the right to live aboard as we did not have the right to shit in the Grande Magdalena as 32 million other Colombians do. Neither did we have the right, after a sanitary inspection, to receive the public on board, our conditions apparently not matching that of 40 million others. Good bye Barranquilla! Good bye Taganka! For two months we had a jolly company of artists aboard from many countries that presented a very charming theater play in the ship’s hold: “Bitácora De Un Loco-Nauta” (The Log Of A Foolish Sailor). The people of Taganga still claims for more!

But he ship heads for the ship yard in Cartagena. The last hitch before crossing the Panama Canal. The captain took to writing his log book that encompasses thirty years of sailing. He invited some of these sailors of thirty years to be a guest writer. One of them is Moretti, with 13 years the most loyal crew member. His testimony is quite revealing. 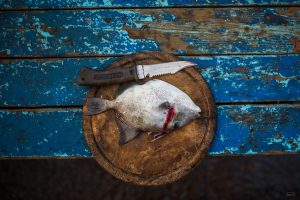 My mom was half wild and my home hidden under an old house. But that doesn’t justify me and my brother were kidnapped to a bizarre old ship before we even could open our eyes. I haven’t even seen the beauty of my birth place, the island Pantellería, home of such illustrious semi-gods as Circe or Armani! Instead of my mothers care there was this huge and strange man called Robbie that fed us with a syringe. But gradually we started to like the place we grew up because it was full of chests, cupboards, closets and hidden corners to climb and clamber and jump. In the beginning, I even liked the sailing because the whole house went up and down and all the kitchen utensils jolly swinging to and fro. The place actually was the home of a bunch of fools whose favorite, professional, drink was alcohol and who had the bad taste to call me “Moretti” after Pantellería’s most popular beer mark. That’s the only sad recording I have of the my birth place. I even heard that my predecessors had names of “Whiskey” or “Vodka”. But I never told them that “Moretti” happened to be the name of a most famous dynasty of Italian Commedia dell’Arte players, so I secretly bear my name with dignity. Anyhow, I became a great actor myself by niche myself on stage among the protagonists during their shows. Before already, I used to supervise their wild parties by nestling on the bar.

Life was very gaily. We hopped from island to island and my favorite past time was settling down near the fishermen on the quay who eventually had no other option than to feed me fresh fish. A real paradise was this small Greek town of Meganissi where the sardines, probably chased by a predator, spontaneously jumped on the quay side by the hundreds. But to all paradises comes an end. These fools had the bad taste to trust us to a group of German volunteers who took care of street animals. Me and my brother, street animals! That happened, of all places, on the very venerable Greek island of Lefkada, where a desperate poetess Sappho lost he​r ​life by jumping from the cliffs and where an equally desperate Cleopatra lost her sea battle and empire. Well, we lost our balls. These volunteers had the self invented mission to castrate all stray animals they could lay there hands on. And, maybe worse, to cut the top of our left ear so as to mark shamelessly our shame!

And life never was the same anymore. My brother, who already had the habit to take a nap on neighboring ships, sailed sleepy away without saying good-bye. That was on a tiny Greek island with barely two hundred inhabitants. Later, we heard he returned there and was happily adopted by an old lady. Not for me, though. I started disliking the long trips at sea for all these wet waves on deck, for this unbearable noise from the motor room, for not having a decent place to shit. At least there’s a garden on the stern with some earth and plants that I freely could destroy. So, as soon as the motor started I try to escape and actually managed several times to seriously delay the whole expedition. Now, during sailing, I hide in a deep corner of the ship’s labyrinth, just like the Russian sailor Wolodja, who’s eternally seasick. I would have loved to join him if his cabin wasn’t shared with the klabum of the motor. That’s anyhow my role on board and they hardly realize it. I’m the ship’s psychotherapist that knows exactly who needs some care and comfort. Every night I find myself another favorite, or maybe two, and their favorite place is straight on their crotches. I very much prefer woman because they’re sweeter and softer and only in these fastidious cold Northern countr​ies​ the skinny captain will do, if no one else is available. That is, he calls himself the captain because he hardly knows it’s me the Prince on board. The place is mine! I’m the boss who’s supervising everything from the middle of the table with some twelve disciples sitting around. Let them entertain their illusions! Some years ago, they had the bad taste to bring a young kitten on board from a farm in the Basque mountains. She really was a beauty but who the heck told them I need companionship? This kingdom is mine! So with a single slap I discretely disposed of her. They found her that same afternoon floating in the harbor. Then they brought her sister who vanished without a trace. I’m an artist, commedia dell’arte! Actually, I myself once slipped accidently into the same spot in the harbor but I got out of it by climbing the concrete poles at the cost of my nails. What else could have happened if a cat returns aboard completely soaked and with blunt nails?

Another trick they played on me was when we arrived from Mediterranean France to this small Basque fishermen’s village. After countless days at sea I had my right on an evening stroll, right? They all went straight to the opera! But nobody had the decency to tell me that in those silly seas there’s something like a tide of five meter difference, so when I came back there was no ship anymore, or at least I thought so. I got planted. I stayed away for ten whole days and won’t tell anybody where I was or what has happened. Now they say they sung my name over the whole village in the four shows they gave upon arrival. Really? I’m perfectly capable to hear my own name if they speak to me, especially if food is involved, but here I came back on my own, but badly wounded. My doctor told me my left jaw was broken and that mending it was 800 euro’s. But these parsimonious fools didn’t want to spend anything on me, well, they didn’t have any. Now, sometimes, my tongue involuntarily sticks out when I’m quietly engaged in reveries and then they start giggling because they think it’s funny. But it’s quite obvious that it’s me who sticks out my tongue to them, isn’t it? My sweet revenge is that I force them to cut my food in very tiny pieces which is a cumbersome job with their blunt knifes, the more so with the fresh fish I start fancying. As well, my voice got badly hurt but this is amply compensated by using my claws that proved to be most efficient.

Lately, they came up with another trick. They made me a facebook page! Pfu! This is the pinnacle of disrespect for an ancient race as ours and the ultimate proof of their foolishness. Their latest inanity is, they hardly go ashore anymore. They know very well that I love sailing only when the ship stays at the quay side where I can find some grass and sand and birds to play with. I suspect this is not very different from the fools themselves as they usually find there whole bunches of fresh fools. But ​now they stay at anchor and confine me to my kingdom. Well, at my age, I don’t care too much. I know to find my shady places in the fresh afternoon breeze. At least, they stop feeding me this miserable cat food, and that’s only because it seems the​re’re hardly ​shops left where you ​can buy it. And when you can find it, it’s as expensive as real ham. So now they buy the real thing and have the nerve to steal part of it. But, most important, they finally are learning to fish themselves. There’s plenty around and they even mounted an outboard barbecue to fry these delicacies. I prefer them fried! If they’re sluggish or lazy I perfectly know to remind them of their duties with a bloody dash of my nails at their paws. Most conveniently, they’ve them bare in this climate! Here, I’m as vigorous as in my best days! My favorite hit is the so-called captain. If he wants his responsibilities, let him feel them! I want my fried little fish to muse about those days. 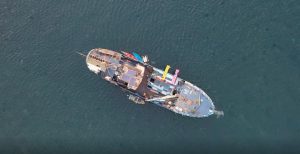