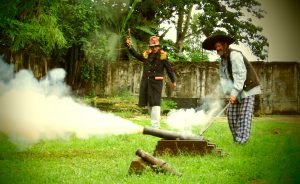 The French Fool Frederic found himself in the jungle, teaching the captain of a small marroon community to fire the outdated cannon that no-one knows how it landed there. He himself learned the trade of shooting by restaging historical battles in full armor. In that way he took part, watched by the Queen of England among other heads of state, in the battle of Waterloo, be it two hundred years afterwards. The cannon’s barrel turned out to be choked with paper and jute as a result of futile attempts to make it work. It had to be thoroughly cleaned. The first trick is to mix flour with the gun powder to produce a fair amount of smoke. The powder you get by bus from the gun shop in French Guyana. The crucial point is not to exceed the dose of powder in proportion with the barrel. The cruel thing is you’re dressed up as European pirates to teach the descendants of run-away slaves to manipulate the very instrument that enslaved them. At six in the morning, the cannon gives the starting shot of Keti Koti, local slang for ‘break the chains’. It is the name of the country’s biggest festival that celebrates 155 years of the abolition of slavery.

Meanwhile, Frederic is becoming the national artillerist. Successfully we tested one of the outmoded cannons of Fort New Amsterdam, this time for the inauguration of an exposition about the five ethnic groups that make up the country and that these same guns brought together. In this country, the subject is very much alive. Our ship, descendant of the Dutch fleet that brought these guns and slaves, chooses the subject for her next show. She’s moored opposite the very building where they were traded. More surprisingly, the subject returns to home town Amsterdam to which the prestigious ‘Rijksmuseum’ dedicates an exposition. Today, the infamous slave registers get published on line, the bookkeeping of the last thirty years of Suriname’s human merchandise, with which the concerned can trace back their grand-mothers. Convulsed histories. Contemporary slavery outpaces all of it.

2 thoughts on “BREAK THE CHAINS”