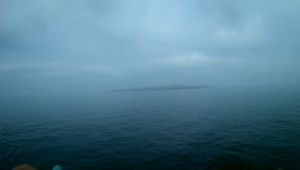 THE STOPOVER
The crew endured heroically the eigth day crossing of the Gulf of Biskaya that turned out to be a collective catharsis. Upon arrival in paradise the crew exploted. The skipper, a straight descendent of the great West-Frisian sailors that conquered the Orient, was send away for his recklessness. The Basque actress, purificated, decided to cycle backwards home along the pilgrimage route from the nearby Santiago de Compostella. The Amsterdam bar boy experienced a revealation and found his destiny, that, for the moment, leads to an alternative farm nearby. The French Buzuki player, as the Caribbean animation maker are leaving with a big smile. A few are left over, among which our French sailor who cannot walk far away with his broken and plastered leg. Instead, embarked has a local Galician gaïta player with his Italian girl friend who sings and plays the clarinett. They’ve been on board some years ago. The gaïta is a Celtic bagpipe and the idea is to connect with a nearby artistic association of Cape Verde women to look for a musical cross-over. The shipload of our next trip.

And paradise it is. This bay is presumably much more beatiful than the Canarian Islands that are infested with the big muddle of ugly and expensive white plastic yachts. In the middle of this bay is a fishermen’s island whose inhabitants have a reputation to be fools. We have to implore the fishers that sail past not to bring more mussles. A few hours after mooring arrived at our achor place the jounalist who’s first assignement in his career was the Ship of Fools. That was 1999 and again he repeated as the fool’s court photographer during our stopover in 2012. Now he created with an article the big fuzz around a festival the public demands us to organize. This festival is going to be a collaboration with a local association of artists headed by the daugther of the ship yard’s owner. It’s impossible to show up on the street or in a bar without being spoken to or interrogated about the upcoming festival. One shows from his wallet a crumpy 1999 black-and-white photograph of the ship. Another one says to shorten his holiday to be there for the spectacle. A woman was indignated to have had to pay for her 1999 entrance while a fat man in front of her went in for free. It seems as if we have come back especially to explain to her that those weighing more than 111 kilo have all the rights to enter for free. It seems our return awakens a collective frenzy about a romantic vision of their own yought, when everybody was twenty years younger. We returned – by chance – to feed more illusions. Yesterday, a family of four delphins were circling around our ship.