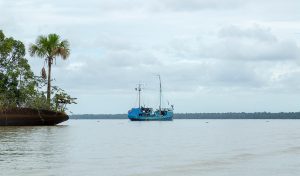 High tide averted the danger of being stuck in the mud forever. The biggest danger of seduction maybe has been the august largeness of the river, far beyond the majesty that presented us already the river Neva or the mouth of the Rhône or even the Amsterdam IJ riversides. The ship now faces down town Saint-Laurent. The other horizon is a green line called Surinam. Our closest neighbour, the steam ship Edith Cavell, wasn’t that lucky. Or was she? She run aground almost a century ago and has been grown since into a most fascinating jungle island. She’s competing to be my favorite ship wreck but she still loses to the Papillon that lays upside down on the squatted Amsterdam ADM ship yard and tha, at party times, becomes a hauntinghly beautiful nigth scene. Maybe I’m sentimental because this very ship Papillon saved us back in 1994 by bringing crew & show to Germany when a pathetic lawyer had our ship impounded. Scandalously, the whole crew, used to ten private cabins, had to sleep in Papillon’s communal hull.

Here, Papillon is Saint-Laurent’s only celebrity. He wrote a novel about his escape from the forced labour camps when the jungle already blossomed in the world’s second most beautifull ship wreck. The city owns it’s origin and existence to these camps with which France got rid of its criminals and tramps. The camp’s quillotine, now hidden in a secret place, still was in function. The disgrace of grandeur. At present, French Guyana seems to be the best organised and most prosperous, decent and boring country of the whole South-American continent. Except, it’s not South-America. It’s Europe, being a department of France. It smells a colony. Child benefits is a way of living. But the Fools face the other side of the river. Surinam beckons us to come. A beautiful, albeit somewhat decrepit quay in the historic heart of the capital is waiting for us. We’re preparing a new chaotic chapter with a warm-hearted public that curiously enough speak the language the locals use in my own country.