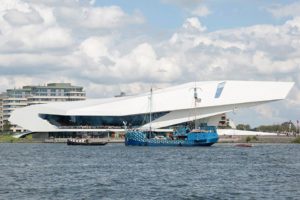 Last week on Saturday, the Fools gloriously set sail on their eternal foolish pilgrimage, most likely never to return to their home town. We took proud pictures against the back drop of the icons EYE and Central Station, until the lid of the exhaust pipes on top of the steerhut dramatically jumped into the air and a fine, private drizzle of cooling water fell down over the decks, making the ship look like a spouting whale adrift.

An exploted motor presaged the end of all travels. The ship started to drift dangerously towards an enormous incoming barge until skipper Axe hurriedly hoisted a foresail to steer the ship back to the quai on the Java-island. The explosion was due to an imprudence of the same engine-driver that kept the 1959 motor running for decades. A few days later that same engine-driver made the diagnosis that the cast iron water cooled exhaust manifold had crashed, irreparable and irreplaceable. But not indispensable… The Java Island presaged future destinations.

So this Saturday the Fools secretly set sail without a cooled exhaust manifold. Drizzling Amsterdam weeped. A few friends waved us goodbye from until the North Sea jetty. There the waves produced a breeze that was enough to knock down the totality of the crew. For hours none of them poked their nose into the steerhut to inquire what was their shift. Normally the captain is served his coffee.

Before the sailing their curiousity about who’s with whom and when still was overwhelming. The same with the food. Before the sailing the brave crew, helped by so many friends, hoarded a stock as if ready to drift two months over the Atlantic. But once on the sea nobody showed any inclination to eat anything. As the skipper is vegan it became my responability to devour the herrings my brother carefully prepared for the crew.

During the sailing the sweet water tank proved to be leaking. In the motor room the cooling system of the gear box started leaking, provoking a shower of oily drizzle all over in the engine room. For a oceanworthy vessel nothing is worse than not sailing. During the night the fools managed to bump into an illuminated buoy, quiet a feat. Once savely landed in the harbour, we managed to break a mooring cable by failing to anticipate the depths of the low tide. The world is awaiting the fools.