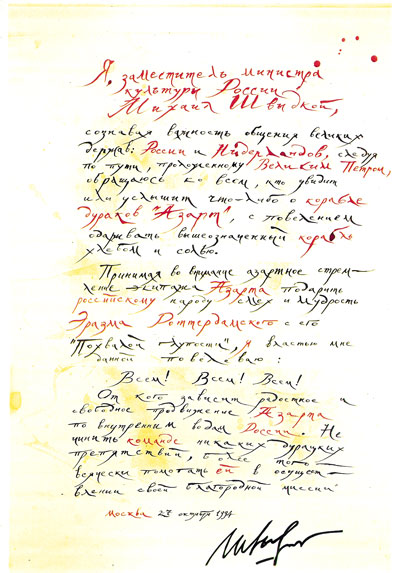 I, Viceminister of Culture of Russia Michail Svydkoi
In recognition of the the importance of the relations betwee the big states Russia and the Netherlands
following the road that has been laid by Peter the Great
I turn myself to everybody who sees or hears anything about Azart “The Ship of Fools”
With the command to welcome above-mentioned ship by all ways.
Taking in consideration the brave pursuit of Azart to give to the Russian people laughter and wisdom
ith their “Praise of Folly” of Erasmus of Rotterdam
I order with all the powers given to me that
Everybody, Everybody, Everybody
From who depends the happy and free passage through the inland waterways of Russia
Not to put any silly obstacles, on the contrary,
To help te crew in all possible ways in the realisation of their benificent mission.
Moscow, 23 september 23, 1994
Mikhail Svydkoi
The powers of the Minister of Defence of Russia proved far bigger than those of the Minister of Culture.
The ship made it to Sankt Peterburg but prevented to sail further
In 2015 Mikhail Svydkoi was Special Presidential envoy on international cultural cooperation of Russia.