To All To Whom These Writings May Come,
We Send Greetings!
To the illustrious, very illustrious, very powerful and wise lords, emperors, kings, republicans, princes, dukes and counts, mayors, sheriffs, councillors, judges and rulers of all the good cities and places, ecclesiastical as well as worldly, we request to welcome the captain of
AZART
registrated in the Rotterdam ship register, belonging to the Cultural Foundation “Friends Of Azart” in Amsterdam,
to receive him, his ship and crew courteously and to offer him appropriate hospitality, permitting him to sail, according to local laws, in your harbours, rivers and dominions.Given in Amsterdam, March,
Nineteen-hundred ninety-five,
Schelto Patijn, 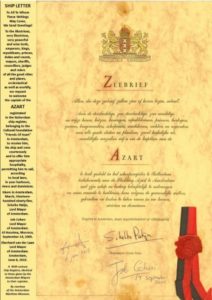