FORTRESS OF THE ARTS

In every harbour the crew builds ashore a 300m2 “festive factory” that
includes the ship as stage and backdrop and a seating platform for up to 250 persons.

This “Blue Square” serves for two or three months
as a local theatre and temporary meeting place,
as a county fair for the Arts and Theatre.

This itinerant small-scale arts festival focuses on the personal involvement of an audience of all cultures and ages and on a cross-cultural exchange between local and foreign guest artists. 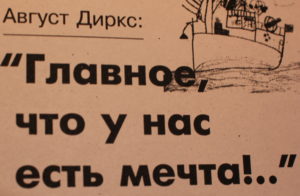 The Ship of Fools proposes a popular feast that lasts as long as she stays in town.
Apart from her comedies she proposes other theatrical manifestations
of high symbolical value.

That starts with the Disastrous Arrival, where the ship enters port
in a cacophony of improbable ordes and manoeuvres.

Then she holds a Jolly Press Conference on Board
as an open invitation to the public and press
and an extravagant Parade of Fools to the city centre.

The Fools pay a Theatrical Visit to High Dignitaries, mostly to the Town Hall, for an exceptional and ceremonial reception in which small gifts and jolly sermons are exchanged – and sometimes a calligraphic ‘Welcome Letter’. This gives lieu to a Toast of Honour and in the best of cases, to a Solemn Banquet.

The crew pays a Theatrical Visit to Institutions for a meeting and a simple, shared meal
in a psychiatrical or penitentiary centre, a hospital, home for the elderly, school, factory or other such.

The public is received on board for a Theatrical Visit of the Ship, a sequence of sketches on seven different locations: the Garden, Pent House, Wheel House, Engine Room, Dressing Room, Clandestine’s Cabin and the Big Artist’s Hull.

The funfair finishes with the Sad Departure of the Ship, dramatic,
because nobody knows if the ship will ever return!

The basic discipline of the Festival of Fools is comic theatre.
The main theatrical events of the festival are:
A continuous, shared, theatrical program from arrival till departure.
Workshops for adults and children resulting in a final performance.

The Festival of Fools is an artistic collaboration in which four partners participate:
The crew
The neighbourhood, the local community
Local artists
Specially invited guest artists from abroad.

The artists in residence is one of the core activities of the festival.

About five guest artists are invited to stay on board during each festival.
Jointly with local artists they dispose of a unique laboratory and platform
for shared projects of an artistic and/or educational nature.

THE HISTORIC FESTIVAL OF FOOLS
Casting Down The Mighty 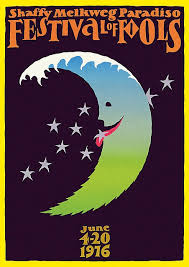 Thousand years ago, the Feast of Fools (Festum stultorum)
was an exuberant celebration
that briefly put the church hierarchy with debauched rituals on its head.

The highlight was a subversive verse of the Magnificat
endlessly repeated by an enthusiastic crowd:
"He has cast down the mighty from their thrones, and has lifted up the humble".

In the seventies, the Festival of Fools became a legendary Amsterdam street theatre festival, impulsed by Jango Edwards that for the first time in modern history
claimed the public space as an artistic meeting place.

This festival gave the immediate impetus for the Oerol and Belfast Festival of Fools
and to the Dutch festival culture that would grow into a major Dutch export product.

Now the Festival of Fools sets sail on a world tour as an endless small arts festival
for an intensive community project.

"The Elevation of the Humble" remains the motto of the Festival of Fools.